I love stream fishing in the spring.  Its too late fish spoons as water levels drops.  Its too early to have a lot of success with dry flies because of debris on the water.  But, choosing the right bait is pretty easy this time of year.  Almost anything will work.  There’s water in every stream.  The fun and challenge of stream fishing is reading the water and knowing where to find the fish.

There are long, level stretches on every stream.  Current slows down because the surface widens allowing much more flow at less speed.   Pools are created in this part of streams.  The trick is to find the pools in the still water. 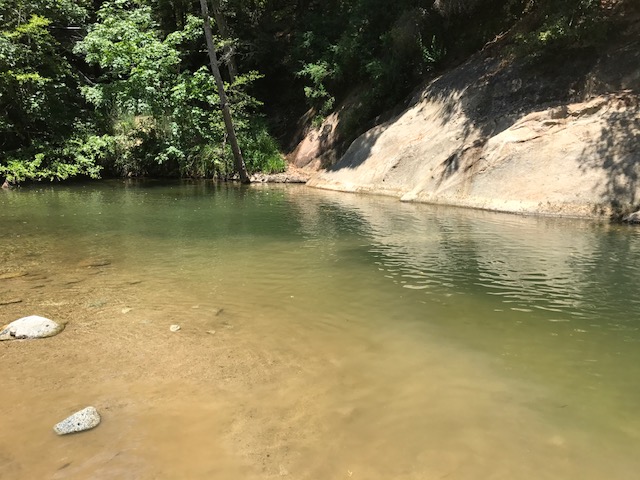 There are several ways to spot pools in still water.

Just above the top exposed rock there might be a small pool in the submerged rocks. A darker bottom can also indicate deeper water for fish to sit.  I wouldn’t assume that I could see fish in the pool.  I would walk a bit further upstream and float my bait through that spot.

There is a good chance that a steep rock face indicates deep water directly below.  Casting across this pool to the rock face would allow bait to drift close to the wall.  Since I can’t see anything at the base of the wall, I would probably hit the wall and let the bait slide in the water.  This would allow it to drift right on the wall. There would be slack so I’d have to watch for strikes.

Still water will hold every species of fish that is in the stream system.  There is a spot in that pool for everyone.  Bass could cruise the bottom or watch the top for food following the slow drift before striking.  Crappies can dart in and out of the current grabbing what drifts.  Carp will just drift on the bottom sucking up what sinks.  Trout will sit in the deeper, cool pools waiting for a bug or worm.  Still water is a lot of fun.

Every stream, large or small, has fast water.  A streams flows as elevation drops.  The more the drop the faster the flow.  Rocks create swells in the current and eddies in their lee.  No matter how fast the water, it is a feeding opportunity for fish.  Fishing the fast water of a small stream is the same as fishing in a huge stream.  The large stream calls for heavier tackle. 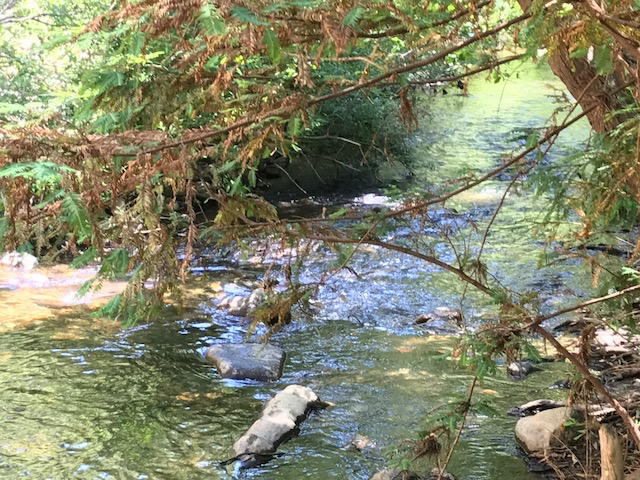 There are several places to fish  in this small stream.  Drifting bait between the two rocks, in the center of the picture, will attract anything lying in that small eddie behind the rocks.  Allowing the bait to drift over the small ledge will carry it across any pools that can’t be seen.

In my opinion, fish do not sit in the rapids, but behind the objects creating the rapids.  Objects in the water create almost motionless areas as water flows by quickly on both sides.  The object itself prevents fish from being battered directly by the current.  I have caught walleyes in huge rapids where fish have hung suspended behind boulders hidden by the rapids.  Strong fish can swim up stream in almost any current, but they  “tread water” suspended behind objects.

In this small stream, allowing bait to flow straight through the current would likely be the most effective fishing method.  In larger, faster water, casting across the current causes the bait to move back across a large expanse of stream as well as being carried down stream.

What Kind of Fish?

There is no way to predict what kind of fish, in a system, will be in the fast water.  Bottom feeders are unlikely, but any species that waits and strikes can hold in fast water to snap a passing meal.  I have caught everything from trout to chain pickerel in fast water.  Just read the water and enjoy yourself. 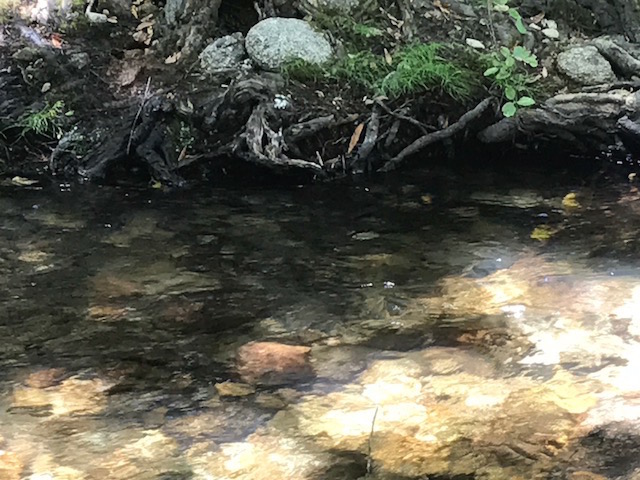 Current under cuts the banks of a stream.  Sometime, as with this picture, the roots of a tree form a roof over the stream.  Sometimes  a ledge is left hanging temporarily when the soil underneath has been washed away.  Whatever the cause, undercut banks are a great place to lay your bait.

When the water is cold and deep, undercuts may not be as productive as still water and rapids.  But, when the sun heats up the water, the cool, dark depth under a bank or root is a great hiding place.

What Kind of Fish?

Any species in the system will seek the shade of an undercut in the summer.  Earlier in the season larger fish tend to use this type of shelter.  Some of the best trout I have caught in a stream have been laying in an undercut.

Successful stream fishing takes some experience.  Exploring each of these three parts of any stream is essential for a great day of fishing.

Take a moment to leave a comment.  Do you enjoy stream fishing?  Have you experience success in each of these parts of a stream? 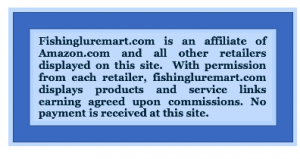 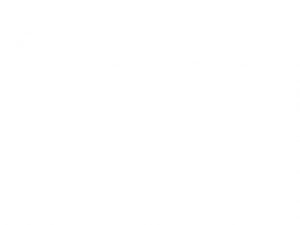